Over the past year I have used a Fitbit to track my activity. If you aren’t familiar with Fitbit, it is a small device that tracks your steps, calories burned, stairs climbed, distance traveled, and sleep quality. The Fitbit contains an accelerometer and altimeter to capture the data and then syncs the stats with fitbit.com.

I have been fairly consistent wearing it and only had a few days where I forgot it at home. Now that I have worn it for over a year, I thought it would be interesting to look back at the 2012 data. The following graph shows the average steps per day broken down by month. It looks like a got a little lazy once football season started and picked it back up in December.

Notch.me is a website that connects with Fitbit and creates data visualizations. Here is the visualization they provided for my 2012 steps. 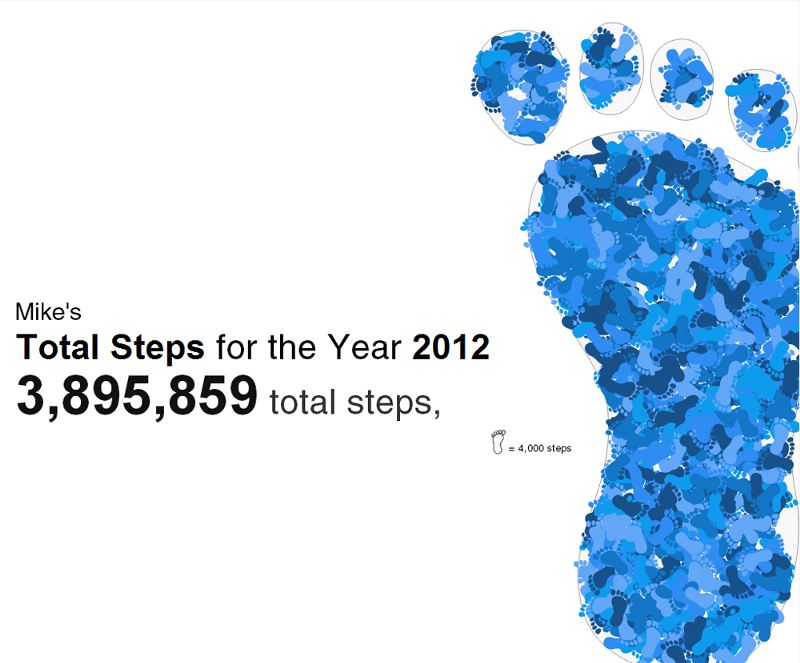 The following are a few stats I was able to gather from the data. I am looking forward to comparing these numbers to my year-end 2013 numbers.

Percentile among men aged 25–34 that use Fitbit

I’m not big on resolutions simply because I think if there is something you want to change you shouldn’t wait to do it. That being said, I have a few improvements I would like to make in the coming year.

Overall I have found that wearing a Fitbit pushes me to be more active. There are plenty of times over the past year that I have taken the stairs instead of the elevator just to bump my stair count for the day. If you are trying to find a way to push yourself, I would highly recommend purchasing one. That is all I have for now, I’m off to add some more steps.